From Freshman to Senior Year: A Letter from Kacie 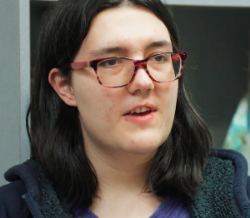 The transition from high school to college is not an easy one. And it’s definitely not easy when you have a learning disability and are used to having accommodations through an IEP. But thanks to programs like Elevate, students with learning disabilities can learn to adjust to college and learn the skills they’ll need to succeed in college. I should know. I have Asperger’s and have been part of the Elevate program at Arapahoe Community College for the past three years. In fact, I became part of Elevate in my sophomore year in 2016; the year Elevate was started. But since my freshman year of college, I’ve grown as a person and learned more about myself. This is my story.

I was diagnosed with Asperger’s when I was in sixth grade. Throughout middle school and high school, I had the support of my teachers and a group of friends who had disabilities like me. But when I started college at Arapahoe Community College, everything changed. I no longer had an IEP to ensure that I got accommodations. Instead, I had to make my own requests for accommodations. And the accommodations were limited. If I needed extra time on a test, I had to make an appointment at the testing center. If I needed help with my math homework, I had to go to the math support center and hope that a tutor would be available. If I needed help writing a paper for a class, I had to go to the writing center in the library. I was also now expected to keep track of due dates on my own; which meant I had to buy a planner and learn how to use it. On top of all this, I had no group of friends who had disabilities like me. That meant no one to have lunch with. No one to study with. No one to hang out with. But I refused to accept that I was having a hard time adjusting and simply pretended that everything was fine around my parents, my teachers, and my counselor through student access services. Eventually, they found out. Particularly, when my grades suffered so bad, I had to withdraw from a math class and retake it the following semester, along with an English class I failed. I retook both classes and passed both. But my parents and my counselor knew that I needed support.

It was in the fall of 2016 that I became part of the first Elevate group. I welcomed the opportunity, mainly because I now felt that I wasn’t alone at ACC. I quickly became good friends with the other group members. And since then, I’ve remained good friends with many of them; while also making new friends. Every fall Elevate gains new members. And I’ve met other college students with disabilities; some who have disabilities that aren’t immediately obvious like me, others who have disabilities that are more obvious. And I’ve had lots of fun with the friends I’ve made through Elevate. We’ve taken campus tours of UCCS, UNC, and Metro. We’ve had lunch together. We’ve gone to parties. We’ve attended the annual summer social fundraiser IN! hosts. We’ve gone to Comedy Works together. And we’ve hosted all sorts of events on campus at ACC through the Elevate club we founded. We’ve done bingo, a special screening of Big Hero 6, pizza and painting, and coffee and donuts with cops. Of course, we also attend study hall and Elevate workshop too. And Elevate has helped me learn all sorts of skills for college. Elevate has taught me all sorts of skills, from study skills to life skills to job skills. When I was in my freshman year of college, I used to highlight all the text in my textbooks. Now, I only highlight the important content. I used to never take notes in my classes. Now, I write down notes as I need them; whether it’s the key parts of a concept in biology, the main points of a philosophy reading, or vocabulary terms that the teacher uses during an art history lecture. I used to just sit in class and not pay too much attention to the lectures. Now, I pay attention in class and actively listen to the lectures. I used to not pay much attention to deadlines for assignments. Now, I write down assignment deadlines in my planner and break big projects into smaller parts. I used to frequently leave the classroom during class for long periods. Now, I limit my breaks and avoid leaving the classroom during class. I used to sleep through my alarm and rely on my mom knocking on my door to wake me up. Now, I get out of bed as soon as the alarm on my phone goes off. I used to waste my money on food from the café. Now, I bring my own food. I used to avoid checking my email for weeks. Now, I check it every day. I used to not know how to write a resume or cover letter. Now, I know how to write them. But these aren’t the only things I’ve learned in college.